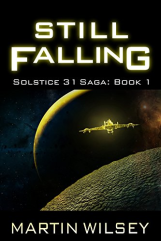 Around two years ago, Author Martin Wilsey and I stumbled across one another at the beginning of my author career. He’s a great man – kind, caring, and funny – and I’ve had the pleasure of reading his material when we worked together on an anthology last year.

Wilsey, a well-rounded author, writes Sci-Fi Fantasy. Today, we’re going to talk about Solstice 31, his growing and popular action-packed series in the genre. I’m one of the lucky ones to have this series on audio and it’s been an utter pleasure to see that though Wilsey has an excellent sense of humor, he also has a darker mind and vibrant imagination. I’m halfway through the first book in Solstice 31, and I’ve been surprised at his talent of storytelling on several occasions.

His writing style is clean, fresh, and little left for distractions, which is excellent in my opinion. Aside from well-rounded writing, his characters are three-dimensional. Even each artificial intelligence character is distinct from the next. When a dire situation arises, I could easily tell how the character(s) would respond because right from the beginning of this fascinating series, I felt like I had known them for half my life. Wilsey is able to captivate a reader’s attention and take you places you’ve never dreamed of.

Fischer: You have several books out. Are you a super series author, or are they each individual series?
Wilsey: I write the kind of stories I like to read. The Solstice 31 Saga is a three book series that has a finite arc for this story and characters. The world that I have built has many other stories yet to tell.
I have written several short stories that give a greater insight into some of the characters in the Saga as well.
My fourth novel, VIRTUES OF THE VICIOUS, is a stand-alone novel set in the same universe. I will be sticking to stand alone but related, stories for 2019. FUN Stuff.

Fischer: What makes the Solstice 31 series more unique than other sci-fi fantasy books on the market?
Wilsey: The Solstice 31 Saga is a three book series. The unique thing is that all three books begin at the same moment in time. They detail the events that occur to different members of the doomed deep space survey ship, The Ventura, that culminate in the Solstice 2631 Incident and the deaths of over 110 million people.

Fischer: Out of this entire series, what is one quoted line inside the books that define the series as a whole? And why?
Wilsey:

Be sure to snag your copies of Solstice 31 – e-book, paperback, hardcover, audio, kindle unlimited.