Even though I created this graphic, it makes me want to read the book! It pulls me right in and now I must discover what’s written on the pages.

That’s right, I haven’t read this one, but I know many who have. They’re comparing it to Patricia Brigg’s Mercy Thompson series. It’s an upcoming popular novel, and if you haven’t read it yet, you should – – or so I’m told. It’s on my list!

Author Erin Casey is known for her world building and character development. Keep scrolling for the synapsis. 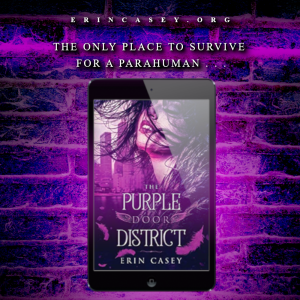 “Bianca was supposed to attend art school in Chicago, not run for her life from Hunters. The only chance she has to survive is to find The Purple Door District, a safe haven for a parahuman like herself. When she stumbles upon a magus named Gladus and a fellow avian named Carlos, she thinks she’s found safety. But the Hunters are relentless, as is the dark force driving them.
Vampire, werewolf, avian, magus.
It’s up to the parahumans of the Purple Door District of Chicago to put their differences aside to save Bianca and stop a dark threat from destroying their peaceful community.”

FISCHER: Bianca is running from the Hunters, correct? Can you tell us a bit more about the Hunters?

CASEY: In the world of The Purple Door District, there are different kinds of Hunters. Some Hunters kill parahumans just for the fun of it and because they truly see people who are “different” from them as monsters. Other Hunters actually focus more on protecting humanity from supernatural threats. In this case, these Hunters are the latter. Bianca has a budding ability to see the future and they’ve been warned it’s a dangerous skill for someone to possess. They’re sent after her by…well, you’ll have to read to see who’s behind it all.

FISCHER: There is quite a bit of creatures in this book. Are these the typical werewolves and vampires to be expected? Or have you created something other than common lore?

CASEY: Yes and no. The werewolves are pretty similar to what you would find in mainstream literature, but they actually have two forms. Younger werewolves can only change into their big biped form. Older werewolves are able to change into that form, as well as a four-footed form which allows them to blend in more easily. They also tend to have better control of their shifting. The vampires are pretty different because they aren’t dead. Instead, they’re born with a chink in their DNA that makes them incredibly sensitive to the sun, (vitamin D deficient), and they’re majorly iron deficient so their diet needs constant blood. They can survive on human blood, pack blood, or synthetic blood, though they get the biggest boost out of human blood. They change humans with their venom. One of their fangs has a venom sack behind it, so they can choose to use the venom or not. Being bit by a vampire doesn’t mean you’ll be forced to change, otherwise, you’d have a ton of vampires running around after meals! The new additions are the werebirds who have the ability to change either into a bird or into seraphs (human form with wings). The major difference for them is that avians are born the way they are. They can’t change people into avians like werewolves and vampires can change humans.

FISCHER: Should we expect a series from this novel? And if not, what are you working on now?

CASEY: Yes! This is just the first book in the series, and I’m about 50,000 words into book two. This next one continues the journey of many of my characters, but also brings in a new cast. While book one focuses more on the werebirds, book two delves into the relationships between the werewolves. This is also an offshoot from a main series that my fellow world creator AE Kellar and I write together called Fates and Furies. We’re hoping to publish the first book either later this year or next year. While I’m writing PDD2, I’m also creating short stories about the characters and posting them on my patreon site to tide folks over until the next book emerges. The first short story came out on February 15th. Check out patreon.com/erincasey to read more!